The Fuhu Nabi Elev-8 tablet gives kids an exciting way to learn. Kids' learning tablets are a great way for parents to give their children something fun to do while at the same time not letting their little ones destroy their new iPad.

While you should always limit your kids' "screen time," it is important that you ensure that when your kids are playing on a tablet that they have the most educational experience possible. The Nabi Elev-8 is a tablet designed to do just that -- and to withstand the bumps, bruises, and scrapes your kids throw at it.

This kids' learning tablet isn't as impressive as many "grown-up" devices. But it certainly has a lot to offer your kids. It's not the cheapest tablet meant for children. But you'll be satisfied with your purchase when you watch your children enjoying their gift.

The Nabi Elev-8's slim design makes it easy for children to hold. Also, it comes with a hefty red bumper that will absorb the damage that your kids would otherwise do to it. The grippable case makes it easy for kids to hold

The case measures 9 x 5.9 x .9 inches with the bumper and weighs 1.14 pounds. In other words, tiny hands and arms won't have a problem holding it. The Nabi's 64-bit, 1.46 gigahertz octa-core processor delivers all the power your kids need. The 1280-pixel by 800-pixel, 8-inch screen allows them to watch their favorite shows and movies and play their favorite games without worrying that they will look terrible. Sure, it's not as powerful as some higher-end tablets. But this tablet packs a lot of power for the price nonetheless,

The Micro-SD slot supports cards up to 32 gigabytes of memory, allowing your kids to store pretty much anything they want. The speakers are a massive disappointment. They do their job, which is to emit sound. But how much (or little) sound they emit presents a problem. The levels cause one to strain to hear in mildly busy environments with a little bit of background noise. Also, they lack quality.

One could describe the two-megapixel camera as "godawful" and still be generous. It takes low-quality photos and allows kids to have fun, but their photographs and video will not win any prizes. It's OK for video calling grandma, though. And hey -- an "I love you" is just as powerful if grandma's little angel's face is a little blurry.

Want to know where the Nabi Elev-8 tablet shines? Look no further than the parental controls. They're like something out of a futuristic dystopian police state novel -- and that's OK if you're a parent who needs to know what your kids are up to.

Your kids won't be able to do anything with the Nabu Elev-8 tablet without your permission or -- most importantly -- without you knowing about it. You'll perhaps find the parental controls a bit confusing and hard to use. But once you master them, you will love them.

The Nabi Elev-8 tablet features multiple parental control apps. You can set a time limit, track how much time your kids spent behind the screen, see what apps they used and for how long, and more. You can force the tablet to go to sleep when your child has hit his or her time limit. You can also set what content and apps are available.

Your kids can make friends with other Nabi users, but you must approve each new friend before they can chat. The Nabi Security Administration (or NSA) lets you spy on your kids' messages and other social activities as well as photos and videos they have taken. You can even customize which websites your kids can visit in the Maxthon Kid-safe Web Browser.

As every parent knows, it can be a chore to get your kids to do their chores. The Nabi Elev-8 tablet solves that issue by allowing you to set a chore list and reward your children for completing tasks with a digital currency that they can use to buy content. These "Nabi Coins" cost real money of course. What doesn't these days, though?

All in all, the parental controls are everything a parent's dream.

The apps and games will also impress you. The Nabi Elev-8 comes with 113 pre-installed apps and games. These range from standard apps like Google Hangouts and Email to the 22 Nabi-branded kids' apps.

What's a tablet without a little fun? The Nabi Elev-8 tablet comes with 28 games, including Fruit Ninja, School of Dragons, puzzle game Threes, and more. Nabi Konnect allows kids to meet other users of the device. Friends are, of course, important. Dream Pro Studio lets kids to draw and animate. FK Crafts gives your children instructions on making fun things in the real world like maracas, wreaths, and more.

The Elev-8's web browser allows your kids to visit all their favorite websites -- if you approve of them, that is. You'll find math, English, science, and social studies apps. The Nabi Elev-8 tablet also includes FK Videos, which features content from Pokemon, Power Rangers, Barbie, Hello Kitty, and more. Nabi Radio (think Pandora for kids) gives your children access to kid-friendly music, too.

Your purchase also includes six free months of Nabi Pass. This gives your kids access to apps, books, and videos from popular brands like Disney and National Geographic Kids. It also includes access to Wings Challenge, an award-winning Teacher's Choice Award learning program. Some parts of this program are available for free, but others cost money. Nabi Pass costs $5 per month after the six-month trial.

The Elev-8's battery is impressive. If you're worried about your child's tablet dying on a lengthy car trip, you'll be glad to know that this device will last through up to nine hours of continuous use. That's roughly five movies if you're used to measuring trip time by how many times your kid can watch "Frozen" in a single sitting.

​How We Reviewed the Nabi Elev-8 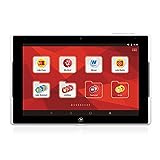 We based our assessment of the Nabi Elev-8 tablet on a combination of user review analysis, an examination of technical specifications, and a comparison to other options available.

Alternatives To The Nabi Elev-8 Tablet

While you'll find the Nabi Elev-8 tablet to be decent for the money, you have many other options available to you if it's not quite your style. 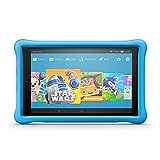 The Amazon Fire HF 10 Kids Edition delivers significantly more power than the Nabi Elev-8 tablet for around the same price.

This tablet is packing some serious power for a budget device. It has 2 gigabytes of RAM and is packing a 1.8 gigahertz processor. The Fire HD 10 comes with either 32 or 84 gigabytes of memory, but the microSD slot allows you to add up to 256 gigabytes extra. It can have as much storage space as some budget desktops!

The Kids' Edition includes a year of Freetime Unlimited, which gives kids access to more than 15,000 apps, videos, games, and educational content. Unless you "hack" your device, you're stuck with the Amazon store. This deprives you of numerous good entertainment and educational options that would typically be available on an Android tablet.

Normally, one would cringe at the thought of handing an iPad to a child by virtue of the cost alone. This iPad tablet is much cheaper than its predecessors. It still costs a pretty penny, between $$ and $$$. If you feel like blowing some cash on Junior, you couldn't do so in a better way.

Of course, this isn't strictly a kids' tablet. Many adults would give their left arm to have one. If you have the money, it's the first iPad that is cheap enough for one to reasonably consider giving to a child. Functionally, it's the same as the previous year's iPad. The cost has actually dropped to the point that you're not losing multiple mortgage payments if it falls off a piece of playground equipment and shatters into shards of "oopsie." Besides, isn't that scenario what protective cases are for?

Sure, it doesn't come with any flashy kids' apps, but you can buy the ones you want. It does, however, have an impressive eight-megapixel rear camera for your little photographer to enjoy.

The 2,048 x 1,536 megapixel-per-inch screen delivers superior pictures and videos. The 1.2-megapixel selfie camera is the most amazing thing on the planet. The eight-megapixel front-facing camera takes stunning photos and video. The new iPad will also last a stunning 10 hours before it needs to be charged.

Once again, this thing has a huge price tag when compared to the Nabi Elev-8 tablet.

How Does The Nabi Elev-8 Tablet Measure Up?

When compared to the new iPad, the Nabi is inferior in everything but price and parental control options. The cameras are lacking, processing speed is lower, and it doesn't give your kids as good of a picture as Apple's offering. However, it's far cheaper and less of an investment. The Elev-8 has more options intended for kids out of the package, but you can buy educational apps for the iPad.

The Amazon Fire HD 10 Kids Edition has a larger screen than the Elev-8. It also provides a superior user experience with faster processing power and superior video and audio. Unfortunately, you're limited to the Amazon store for apps which means giving up Google and Microsoft offering and more. Like the Nabi Elev-8 tablet, the Amazon Fire HD 10 offers a wide selection of kids' apps via its subscription service. Parental controls are similar, but the Nabi edges Amazon out on that feature. Cameras on both of the tablets are not so great.

The Amazon Fire HD 10 tablet is in a similar price range to the Elev-8. So if you have just a little more money, you will probably want to consider Amazon unless you have a specific reason to want Nabi's kids' tablet.