Everyone dreams of making their own video game someday. Who wouldn’t enjoy the endless fun of walking around an area they made, fighting monsters, solving puzzles, and truly having their piece of the game world to explore? That’s often why games like Minecraft are so popular, because they allow the players to tailor the experience to their own style. Another game that does the same thing is covered in our Bloxels review.

Bloxels is a game that combines a virtual world with physical items that your kids can hold in their hands. They work by educating kids about coding and challenge their development skills and imaginations.

You create characters, items, and animations by placing cubes on the board, then scanning and uploading them into the game through an app.​​

You use a free Bloxels app and a gaming board to create pixel artwork. By placing small cubes into a 13×13 game board, you can create characters that inhabit the game world as well as the player characters. Then you scan the item into the app with a camera, and the design appears in-game.

Within the app, you can also create terrain, obstacles, and other items to create levels.

Once the item is scanned into the game, it becomes available for use in the game world. The game functions as a side-scrolling platformer, almost like the Super Mario games. So, you have the character go through the level, collecting coins, fighting enemies, and trying to make it to the end. You can also use text to tell a story through the game.

The app also focuses on creative thinking and designing levels that are both fun and practical that other people want to play. The app also features a code board, where you can insert commands and make new rules for the game. For example, you could code that every orange terrain block is lava, or that once the final boss is defeated, the game ends.

There is a good mix of skills for both new and old coders alike. We found during testing that it was a lot of fun to try and stump one another with levels. Plus, those of us who grew up with the old pixel platformers really enjoyed the nostalgia factor. In addition, we could easily transfer characters and data from different devices, as long as each device had a free Bloxels account.

For our Bloxels review, we bought the kit. The physical game board and kits can be bought for around $20 dollars at Amazon and the Bloxels Store, as well as various physical toy shops. The app is free, and while you don’t need the game board to have the full experience (as you can build your characters and items within the app) it is fun to actually build your characters from scratch.

We compared the Bloxels App and game board to other games on the market to see how they compare in our Bloxels Review: 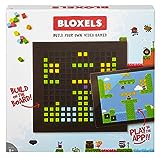 Mattel Bloxels Build Your Own Video Game (Discontinued by...
Buy on Amazon

The App and Game board integrate well together, allowing for physical designs to quickly be uploaded into the virtual world. The blocks come with their own separators, so you don’t have to worry about losing them and can organize them easily.

It’s very obvious that a lot of hard work went into this, and it showed during our Bloxels review. The design is wonderful, and the physical items are durable, so they can withstand playing from younger kids. The app is well designed and for the most part easy to understand, so you’ll be creating worlds in moments!

The recommended ages are 8-13. The blocks are fun to play with, so we could see younger kids having fun with just the physical components. The coding might require an adult’s help for the first few tries, especially if the kids are creating their own games. 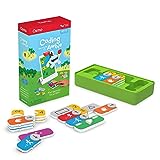 This game operates on the same basic fundamentals of Bloxels, where physical shapes are designed to help kids learn to code. But instead of designing your own game, this product has you code an existing one. There are shapes with numbers and pictures on them, and you stick them together to manipulate a character on the screen.

The blocks that you connect together are actually fun to play with on their own, snapping and clicking together. The app requires an iPad or tablet device and teaches coding very well. By putting the character into different situations and giving the kids tools, they pick up coding rather quickly.

Again, this was a product that had a lot of thought put into it. When most people hear the word coding they think of difficulty. But this simple game teaches a lot of coding mechanics while presenting the instructions in a clear way. Even novices will be able to pick it up without too much trouble.

Forget the age range, this game is fun for kids and adults! It has enough basic stuff for younger kids to grasp, while older kids will be able to create more complex commands and solve the problems faster. 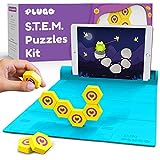 This game doesn’t use blocks but instead uses hexagons to stimulate STEM skills and promote problem-solving. The physical items all contain numbers and mathematical symbols on them. You can play counting games and linking games, that use the pieces as playing tools. Children will have to design the shapes with the hexes or solve the math problems with the counter tool to win whatever game they are playing.

While getting into the game requires parental permission as well as the use of the pieces to select the game and level you want to play, it a fun product. It’s more about the hands-on and building aspect, as your child plays with the pieces, but it can be used to teach creativity.

The app and pieces are all designed really well, allowing for clear instruction to play the games. You can also connect either a phone or a tablet to the gamepad, although some sizes are not supported. It really encourages a lot of tactile play, perfect for kids who love to get their hands on things.

It’s a good game for kids who have trouble focusing on one thing at a time, or who need to improve their motor skills. There are also several additional modules to add to the number of games you can play.

If you want to have fun with how coding works in the real world, then this is the item for you. Botzees are little robots that kids can control with their coding skills. The robots come with parts that you can use to build one of 6 pre-designed bots, or you can build your own and code them yourself.

The machines teach coding skills by allowing kids to build their own robot friends. You build the robots using over 130 different pieces, and once they are all put together, you can go into the app and start issuing commands and programs.

The robots are very well designed and incredibly customizable, and you can easily put together your own custom robot in minutes. Then you can use the app to make the bot move, and even play augmented reality games right on the floor!

The robots will be loads of fun for younger kids, and if they like Lego sets, they will love these toys. Older kids might have more fun with the coding and online aspect, especially once they get a good understanding of what coding is. Still, kids will need parental help to get logged on and get the bot connected.

Conclusion for Our Bloxels Review

Bloxels is a fun game that not only teaches coding but encourages it. By stimulating the imagination of its players, soon they will graduate from making characters to making levels, to making levels that are more complicated to play. It’s fun for the whole family, and it really promotes the ‘hands-on’ aspect of coding.

By being able to use both physical and electronic mediums to teach the subject matter, the players see both sides of their education. Instead of passively absorbing the information and being glued to a screen, they are actively touching and building what they want to create. That’s a skill that can never be taught too much.

If you want to teach your kids coding skills, then this is the game for you. Our Bloxels review gives the product 5 stars and we encourage you to keep an eye on it as it moves forward.